Abstract: As Carrier Ethernet service providers rollout newer services for Ethernet Business Services and Ethernet Backhaul, they would no doubt need to ensure the integrity of their circuits while keeping network downtime to a minimum. It becomes imperative that they are equipped with the right tools to benchmark these services to industry standards, while facilitating rapid turn-up and trouble shooting of the services.In the second part of the two-part article, we describe a few scenarios that highlight the challenges of comprehensively verifying circuits before handing them over to customers. 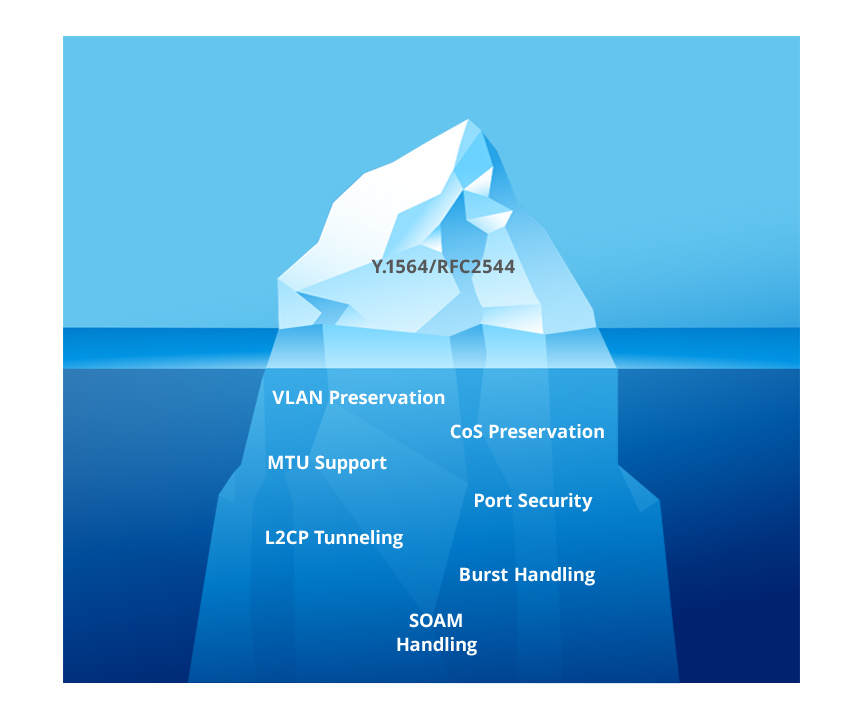 Often Carrier Ethernet service providers rely on either ITU-T Y.1564 or RFC2544 tests, to check network integrity before service turn-up. As the first part of the article described, that much like the proverbial “tip of the iceberg”, there are a number of other problems that could potentially lie undetected until customers start using the network.

We will examine a few scenarios where it becomes challenging to perform tests to ensure that the circuits perform as expected.

Today, it is common practice among service providers to over-provision the circuits to ensure that the SLA compliance is met under all conditions. This is mainly because of the unavailability of tools that can precisely simulate various conditions during testing and ensure the integrity of the circuit. The downside of this practice is that this results in inefficient utilization of the network resources, since the maximum number of services that can be supported on the network will be reduced. Also, allowing more than required CBS introduces additional delays on the streams which follow a bursty pattern. Ideally, the bursty stream exceeding the CBS should be dropped. Hence, configuring CBS to a value that is higher than required in order to avoid packet drops would result in inefficient utilization of the equipment that was designed to support more number of services. Thus if over-provisioning could be avoided, the network would be optimally utilized.

Increasingly, we come across spam applications which hack the network resources by flooding packets with unknown MAC addresses. To handle this problem, usually service providers restrict the number of unknown MAC addresses that can be learnt from a specific customer. It is important to verify this configuration before service turn-up, else spam applications can easily hack network resources by flooding packets by varying MAC addresses, thereby affecting other customer traffic at various nodes in the network.

As is evident in the examples highlighted above, devising tests to handle these conditions would take up a lot of effort and time, especially if they are performed manually.

A cost-effective tool such as SAMTEST which provides automated tests that cover these scenarios in a comprehensive manner, with minimal effort from the service activation team, could be a vital asset. SAMTEST provides comprehensive testing for Y.1564 and C.E. 2.0 requirements, with a high level of automation.

Veryx Technologies provides innovative testing, automation, and monitoring solutions for developing and deploying communication networks. Veryx delivers superior value to its customers through the design, development and deployment of comprehensive, high quality, flexible products in the testing domain. Veryx products are well complemented by the professional services that it offers to its customers.

About Author
Madhan Panchaksharam is the Senior Manager – Product Management and Marketing at Veryx Technologies. Madhan drives the overall product management and marketing efforts at Veryx. He has close to a decade of experience in the networking industry spanning multiple technologies, including Broadband Access, Carrier Ethernet and Mobile Backhaul. He has a Master’s degree in Strategy and Marketing from Indian Institute of Management, Lucknow and Bachelor’s degree in Electronics and Communication Engineering from College of Engineering, Guindy, Chennai. Madhan can be reached at [email protected]